People are wearing hats, scarfs and gloves. Usually a weather to stay at home, drink hot tea and watch TV. But these days no one seems to care. Thousands of people are crawling through the streets of Grahamstown, a city in the Eastern Cape of South Africa. A city with round about 50.000 inhabitants, a big number of them students, but with more than double the number during the time of the South African National Arts Festival.

Once a year, starting at the end of June, the National Arts Festival runs for eleven days. The festival’s tradition began over 180 years ago when British immigrants started celebrating landmark anniversaries, which means that they hosted carnivals and festivals not every year but every 25, 50, 75 and 100 years During the last century a movement started to build a memorial for these pioneers and finally it was decided to also create a “living” monument, which means that festivals should be presented in the town on a yearly basis. So in 1974 the Settlers National Monument was official opened and along with it the first festival, the Inaugural Festival, was celebrated. Since then, every year except in 1975, a festival has been organized in Grahamstown around the Monument. Whiles the aim once was to celebrate, establish und maintain the cultural heritage of the English-speaking South Africa it changed its character occasionally during the 1980s into a forum for political and protest theatre. After the end of Apartheid it depoliticized and now reflects the South African culture of today. This year is the 42nd year of the National Arts Festival and it is the largest and longest running festival of its kind not only in South Africa but on the whole African continent. No wonder that people from all over the country, the continent and even the whole world can be encountered here. “We are from Boston in the USA,” a group of young guys answer when asked by a comedian in his show where they come from “We are on stage as well but we also want to see as much as possible of the African arts as long as we are here.” Others have arrived from the UK, Germany, Namibia or Mozambique. 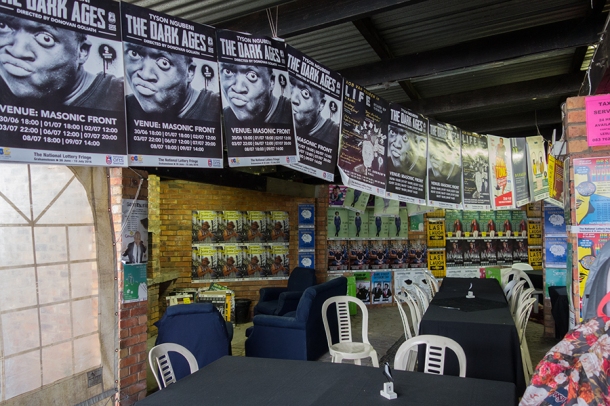 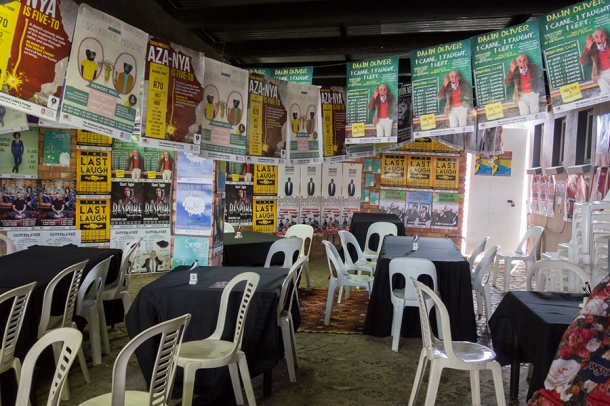 There are a lot of different shows to see. “Bon Soir 1.5” for example, a performance that is sold out within minutes, is a circus show nominated for the Circus Award 2016 that offers a mixture of illusions and comedy. In some plays the audience can intervene by making suggestions, what the actors should do next. Other shows want to send a message, “Ebola” for example: a play by one actress about a venture into the terrifying world of Ebola. There are even shows that are directed by a team of performance artists from different countries, working together to enhance a deeper understanding about a big topic in South Africa: sexual health with a human rights perspective. The evenings are dominated by jazz music, concerts played by youth bands and singers.

Hotels and guesthouses are booked out weeks in advance. For those, who were not lucky enough to get a hotel room, student accommodations are prepared. They are not as fancy as the rooms in the four or five star hotels but clean and safe and even have breakfast included. They are even equipped with one of the most important things during this time of the year: a heating or at least something than can be compared with heating. It is more ore less one heating element on the walls of every room that does its best to keep the room warm. The showers and toilets of course have to be shared with all the other guests on the floor. No problem normally, but this year the city struggles with big water problems. A pipe has broken and sometimes leaves whole districts without water for a few hours or even days. No one could tell if and when this can be fixed. While this would be a huge problem and a reason for reclaims in big touristic cities no one moans about this here. Instead they buy water in the grocery stores and the comedians include what happened in their program immediately: “Free Wi-Fi but no water – yeah, Grahamstown you guys do it the other way around. At least this finally gives me a reason not to shower for three days.” 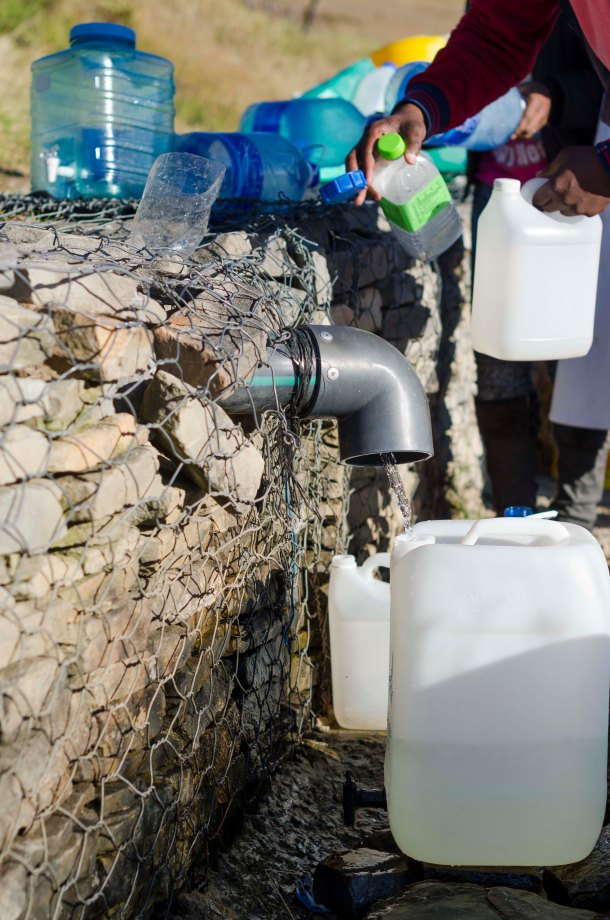 Grahamstown residents queue at the spring to fill containers with water just outside of Grahamstown, Photo: CuePix/Greg Roxburgh – NAF 2016

It is nearly impossible to decide, which show to book. Eleven days seem to be a long time for a festival. But compared to the over thousand offered performances in over forty venues in the city it is not enough time to watch everything you want to see – even if you start at 10 o´clock in the morning with the first show and end at 11 o´clock p.m. with the last show of the day. Sometimes 30 shows are running at the same time. The program comprises drama, dance, physical theatre, comedy, opera, music, jazz, visual art exhibitions, film, student theatre, street theatre, lectures, craft fairs, workshops, tours as well as a children’s arts festival. Hard to tell what a must-see is, especially due to the fact that the actors vary from students taking part for the very first time to professional actors that are here for the 20th time in a row. New and young comedians for example astonish with hilarious stories about their school time as well as analyses of the current political situations. Since it is election year in South Africa politics is a big topic in many shows. But even jokes about Brexit and the refugee crisis are not rare.

The audience´s reactions are surprising as well. Twelve-year-old children bubble over with laughter due to a gag about the finance minister, students giggle about old chestnuts and adults scream at the actor that it is way too early to make fun of the whole Pistorius-story. The audience likes to be part of the show, to share their experiences. For a foreigner some things might be strange. For example that people start to dance immediately wherever there is music to hear no matter if they are in the middle of the street or the middle of an act. Or that no one is offended when the actor approaches one particular woman in the audience just to tell her that her head reminds him of a BMW5. Or that actors change languages in the middle of their sentences – from English to Afrikaans to Xhosa or Zulu. Therefore not everybody will get the whole context. But it is a great opportunity for foreigners to learn a lot about Africans’ everyday live for example when an actor throws punches at the still existing xenophobia amongst black people or the still existing social distinctions between black and white people.

Apart from the shows Grahamstown itself has a lot to offer. Built in 1812 it is one of the oldest cities in the country. Additionally to the question, which shows to see there is the question to answer, which sights to visit. Sometimes it is possible to kill two birds with one stone, if a show takes place in one of them. The City Hall that is known for its Victorian frontages hosts some shows as well as the History museum, so that the visitors could throw a glance at the first dinosaur skeleton found in South Africa along the way. Other sights like the St Michael and St George Cathedral are also worth a visit. Since Grahamstown has over 40 churches with a scope from Roman Catholic to Scientologists, it is also known as the “City of Saints”.

In case someone needs a break, they can be spent splendidly at the Village Green craft fair, a huge meadow where nearly one thousand stallholders sell food, drinks, arts and crafts. The variety is huge in terms of the kinds of products, their prices and their origin. The scope reaches from a one-man-kitchen where organic vegan food is offered to a stall where a bunch of guys even brought a few stoves to sell Chinese noodles, from off-the-shelf articles to handmade and unique single copies. Most are regional products. There is a woman from the Eastern Cape selling frames she built from wood a local sawmill had sold her. There is a paintress from the Waterfront in Cape Town who prints her drawings on fabrics and sells them to make art affordable for everyone. And there is a family from the rural areas of the Free State selling pottered mugs that still have the taste of clay, if you drink from them.

People working hard to set up the Vilage Green for the National Arts Festival on the Great Field at Rhodes University, CuePix/Ivan Blazic – NAF 2016

The National Arts Festival is however a great example for a festivity where everybody is welcomed whatever color, sex or creed. It does not matter if the guy sitting next to you in the grass eating and enjoying his coffee is poor or rich, black or white, Moslem or Christian, storyteller or listener. Important is, that people come together, share their art, maybe make use of the opportunity to give new inputs in political or cultural discussions, and enjoy the sun that has finally found its way through the clouds.

One thought on “Grahamstown National Arts Festival: The largest of its kind in Africa”